via The Washington Examiner by Salena Zito

"I am ready to run again for governor," Walker told the Washington Examiner after a dedication ceremony of the 200-mile Frank Lloyd Wright Trail.

Walker is one of a string of Midwest Republican governors in Michigan, Ohio, Indiana and his state of Wisconsin who have run and won in traditional blue states in difficult elections and emerged as strong executives as the country battled itself out of the recession.

"I have not been as optimistic about the future of the state of Wisconsin as I am right now. And I'm even more excited about how much greater it can be going forward," he said.

Walker indicated he will make an official announcement later this summer.

The former Milwaukee county executive and 2016 presidential candidate ran and won his seat three times (there was a recall election in between his two outright wins), and his party has twice taken the state attorney general's office, won control of both state legislative chambers (and retained them twice) and won a bruising state Supreme Court race.

Republicans also hold the majority of the state's House delegation (five of eight) and one of the two U.S. Senate seats.

Wisconsin's rising red sentiment has bled into neighboring Rust Belt states. Take a look at Minnesota, next door. While the president did not win the North Star State, he was just 44,000 votes short. He'd been expected to lose by eight percentage points.

Minnesota's GOP expanded its state House majority and won control of the state Senate for the first time in six years.

Michigan, Iowa and Indiana all have become redder over the past eight years. If this continues, the new mantra will be "As goes Wisconsin, so goes the Midwest."

It's fair to say Wisconsin and Walker are a microcosm for what Republicans have done right in the past eight years in winning 1,100 down-ballot seats across the country. It may offer Republicans a model of how they either keep that majority or lose it.

According to Walker, as long as they continue to govern, the party will keep growing. "We did something really important in Wisconsin that Republicans more than ever need to know in Washington. And that is, we did what we said we were going to do" once elected, he said.

Walker took heat for his budget cuts, which led to his recall challenge, but he stuck to his campaign pledges to reform the state government.

"We act boldly, then lay out a clear plan, and we act on it. And that's why not only did we get elected or re-elected, but now others like Donald Trump and Mike Pence were able to carry that similar message and people believed them," he said.

Walker said business growth, caring for the citizenry and strengthening infrastructure are the path to success that all his Midwest counterparts are attempting. "You do that through good governing," he said.

When Walker took over at the state capitol in 2011, he inherited a state deficit that had expanded to more than $3 billion under Gov. Jim Doyle. Walker cut that to $1.4 billion by 2014, although it has slid back up to $1.7 billion in recent estimates.

Unemployment has dropped, labor participation is up and property taxes have been frozen or lowered since he took office.

Walker says his goals are the same as those espoused by his neighbors: strong education and technical training, paying attention to rural communities with access to broadband and social services, and reforming entitlements to get people back into the workforce.

"We've just aggressively invested in things that build our workforce, and that's made it easier for us to both attract and retain and grow current businesses," he said.

"This is the kind of governing that has grown the Republican Party in all of our states." 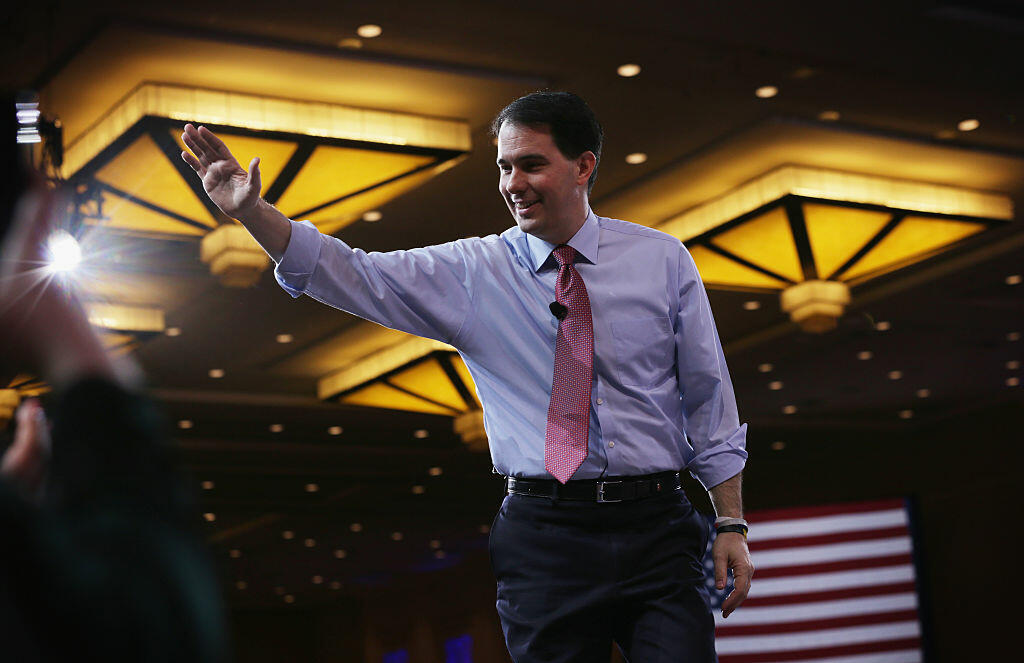