RUSH: So it appears that the Democrats think -- and you'll hear this in the audio sound bites coming up -- they think that Trump and Pompeo are lying to 'em, that there was no reason to get Soleimani because Soleimani was not planning imminent attacks. Trump has said that he was. Pompeo has said that we have active intel that he was planning attacks. He had hit the Saudi oil field. He had attacked an embassy in Iraq. And they've got intel that he was planning to hit the U.S. embassy in Baghdad.

Do you know how big that embassy is? People have no idea. Our embassy in Baghdad rivals the Vatican in terms of size. There are 16,000 people in our embassy there. It's a lot of potential damage just waiting to happen. But they're trying to claim that Trump made it all up, that there wasn't any intel. Trump said at his rally last night that the reason he didn't let Congress know first is 'cause they would have leaked it. 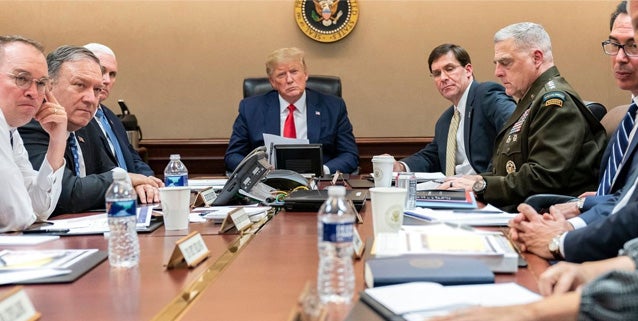 And there's no doubt about that. If Adam Schiff had gotten hold of this or Pelosi, you know damn well they'd a called somebody in the media and tried to sabotage the mission, not because they love terrorists because they’d try to undermine Trump. That's all they've got. The only thing the Democrat Party has is attempting to undermine Trump at whatever stage and with whatever policy that he happens to be interested in or engaging in. And there's no question he's right about it.

But on this imminent threat, this is really how empty they are and how baseless they are. "Trump didn't have any evidence. There's no imminent evidence that Soleimani was going to hit our embassy." Do you remember -- and I pointed this out yesterday -- George W. Bush, after 9/11, after a week or so had gone by, maybe two and the dust had settled and the fake unity had finally evaporated and the Democrats once again became partisan, what did they say?

They said that George W. Bush didn't connect the dots. They said Bush is an idiot. They said Bush and his administration are a bunch of fools. It was clear as day what bin Laden was gonna do. The signs were all there. But of course the FBI couldn't talk to the CIA because of the wall the Clintons had built between various agencies so they couldn't share data. That was Jamie Gorelick. I'm sure you remember this as I bring it up. But their point was was that Bush had all the data. He had all the information to conclude that something was up, but he didn't do anything.

So Bush didn't connect the dots and therefore Osama Bin Laden hitting us on 9/11 was Bush's fault, even though it was the Clinton administration who twice had a chance to take out bin Laden and both times failed to do so. There were two different occasions where Bill Clinton was told we've got bin Laden on a silver platter. One was in Africa. I forget where the other one was. And Clinton decided not to do it for a host of reasons rooted in the fact the world would hate us, we're a super power, he's this little terrorist guy. It just wouldn't have made sense. It wouldn't have fit with other elements of the Clinton foreign policy.

But my point is that all of that took place over years. There was no imminent threat, meaning there was no intel saying in the next five days bin Laden's gonna attack the World Trade Center. But there was all kinds of chatter. So now let's jump forward to Soleimani and this incident. Trump has done exactly what the Democrats were demanding and accusing Bush of not doing. Trump has connected the dots. We've got intel, says this guy, number two in Iran, number one terrorist, planned on hitting a bunch of American targets in addition to the over 600 Americans he's already responsible for killing. And so we're gonna take him out.

So in this case Trump has done exactly what they said Bush didn't do, and now they want to go after him for war crimes? This is how baseless they are. They are standing in quicksand.

RUSH: I want to go back to Monday on this very program and something that I, eh, pretty much predicted.

RUSH ARCHIVE: Since they have now corrupted the entire original intent of impeachment, what is to stop them? They can impeach Trump for anything they want if they can get the votes for it -- and in the House, they clearly can. So Schiff or some other committee chairman can open hearings on whether or not Trump is usurping his power by not consulting Congress and ordering military action, say, against Soleimani or anything else that might happen in any theater of military operations. Nothing to stop them from doing this other than common sense and political restraint, which they have demonstrated they have none.

RUSH: All right. So there I was predicting they could reopen impeachment, bring Soleimani and terrorism into it. Here's Eric Swalwell on CNN this morning. Question: "In your briefing from the on the death of Soleimani, did they tell you that there was a threat to U.S. embassies?"

SWALWELL: In the multiple briefings I've received on this, they have not shown imminence. But they have also now consistently shown that the president -- whether it's on Russia, Ukraine, or Iran with this recent Wall Street Journal reporting -- puts his interests above America's interests. And this Wall Street Journal reporting seems to be more consistent with who Donald Trump is, that over the holidays, GOP senators who would be crucial to him for the impeachment trial were urging him to take actions in Iran, and that's connected to what he did.

RUSH: There you go. Now they're folding this into their whole impeachment thing, that Donald Trump doesn't do anything for America that isn't good for Donald Trump first -- and then you heard the word "imminence." "I didn't see any imminence in the..." This imminence business can be nuked easily (I showed how to do it in the first five minutes of the program today), and turn it right back on them with Bin Laden or any other terrorist they fail to take out when we had the chance, when they were running the show.